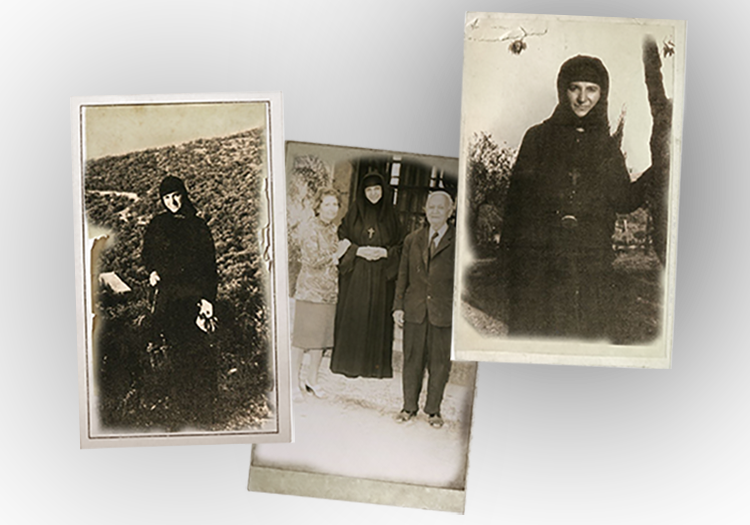 Lord Jesus Christ, Son of God, have mercy on me, a sinner

Eugenia Klidara was born in Plomari, Lesvos. She was baptized Irene.

Her parents, father Philipos Klidaras and mother Aspasia Mamakou, instilled the Christian values into her from a young age.

She finished elementary school at her homeland with excellency while being deeply involved in Greek and international literature at the same time, before she moved to Athens where she completed her education.

She studied Theology and Literature and specialized in Philosophy through which she acquainted herself with the most renowned theorists and scientists.

She preached to St. Barbara Church in Daphne, Athens and to The Ascension Church in Vrilissia, Athens where she displayed a great deal of beneficent work. Later, she returned to Plomari and decided to become a nun. She used to visit Holy Protection (Agia Skepi) Monastery in Chios to meet the monk Kornilios Marmarinos, her spiritual father.

She took her holy orders on Chios Island from the late Metropolitan Panteleimon Fostinis of Chios, who tonsured her and immediately gave her a high position in the hierarchy (parathronion) of Holy Protection Monastery (Agia Skepi).

She became highly revered by the community through her work.

She returned to Lesvos on March 27, 1964, after she had been invited by St. Raphael himself and the late Metropolitan Iakovos Kleomvrotou of Mytilene, who immediately appointed her as an Abbess of the St. Raphael Monastery. From then on, the Monastery in Karyes was erected from scratch with the earnings from her writings. From literally a tent, it was turned into a religious worship centre through her books and by word of mouth of the numerous devoted Christians who were visiting the monastery from all over the world.

Her personal offer to the community was major and endless; scholarships, funding for schools, establishment of nursery schools etc.

Her talent in writing was great; she composed poems, and she wrote novels and Christian biographies accredited her various international awards.

Since 1973 that her poem anthology “Bright Hopes” was published she went on writing up to 2012 when her last book came out.

Eugenia Klidara was born in Plomari, Lesvos. She was baptized Irene.

Her parents, father Philipos Klidaras and mother Aspasia Mamakou, instilled the Christian values into her from a young age.

She finished elementary school at her homeland with excellency while being deeply involved in Greek and international literature at the same time, before she moved to Athens where she completed her education. She studied Theology and Literature and specialized in Philosophy through which she acquainted herself with the most renowned theorists and scientists.

The late Abbess Eugenia first came to the place where the tombs of the Saints were found, in 1964.
She writes about that period in her book:

“I found nothing else but the lower church which was half-built. I had nowhere to stay. There only was the beautiful, dry mountain. I put up a tent to use during the day and at night I stayed at the village of Thermi. You could find nothing but snakes and scorpions all around”.

Someone who visits the Monastery now is left flabbergasted to see the size and the beauty of the Monastery premises; churches, chapels, workshops, big guest-houses, a library, complementary buildings, gazebos.

Owing to a numerous and devoted sisterhood of nuns, there is order everywhere and the place is full of plants, trees and flowers.

In their every day workshops the nuns laminate Orthodox icons, create handmade objects and prayer ropes and their chores include the cleaning of the churches, the accommodation of the vast number of guests and the fulfillment of the orders of the late Abbess’ books.

Her well acclaimed books (170 internationally awarded) are delivered all over the globe, while some of them have already been translated in various languages. Her books were the only source of income for the late Abbess Eugenia which she used to erect the Monastery and fund her great cultural and social work.

To the magnificent Monastery premises, apart from the upper two-storey Church dedicated to St. Raphael and the lower church dedicated to The Nativity of the Virgin Mary and the Saints Nicholas and Irene, various chapels can be found;

The Metochion of Prophet Elias and the big Church of St. Magdalene that were built by the late Abbess Eugenia also belong to the ownership of the Monastery.

Inside the Monastery one can find the Exhibition Area - Bookstore where the books of the late Abbess are sold and the big guesthouses where the pilgrims are accommodated for three days for free.

• The late Abbess Eugenia is the founder of the holy Church of St. Theodore the Byzantine that is located in the Military Command of Mytilene.

• With the earnings from her books she also built a Church devoted to the Saints Raphael, Nicholas and Irene in Cameroon, Africa as well as a school and a hospital in the city of Tatseka.

• Through her generosity and kindness the late Abbess Eugenia Klidara drugged out of the dark, squalid streets people with AIDS, orphans and starving children and took care of them. Once a day, she provided food for 4.000 impoverished children that otherwise would roam the streets dirty and scared, and educated them.

• She also funded the renovation of schools and the construction of churches in Mytilene (Paul the Apostle Church and the Church of the Three Infants), she financed the expenditure of three nursery schools in Mytilene, in Thermi and in Plomari.

• She also covered the expenses for the new IT building of the secondary school of Thermi and supplied all the necessary equipment.

• She also subsidized the library of the historical Experimental Middle and High School of Mytilene after she had restored its valuable books.

• She also set up two libraries for the Experimental School of Mytilene one of which she supplied with 380 scientific books and all of her books as well.

• She also supported multi-child families, charity organizations and the Nursing Home of Mytilene.

• She annually awarded distinguished students of the Middle and High Schools of Mytilene, Plomari, Pamphila and Moria.

• She subsidized the publications of books of various authors of the island.

• The Philharmonic Orchestra owes its magnificence to the Late Abbess Eugenia as she supplied them with the instruments and uniforms.

Her writings serve the creation of God, the MAN. Her social and national work serves the MAN and the COUNTRY.

The late Abbess Eugenia is not only nationally but internationally acclaimed for her writings (literature, poetry, theological and cultural).

She won gold medals, commendations, awards, certificates, golden keys etc., while she had been isolated to the Monastery from the day she entered back in 1964.

For the religious sisterhood of the Holy Monastery that she created, she will always be remembered as the Mother of Love - the personification of humility and spiritual battle.

She will remain for the generations to come a bright example of virtue and piety.

The late Abbess Eugenia aimed at the future while at the same time she was observing the past.

Free of the brutality of egocentricity, she put her soul into her books. In an everlasting, pretentious world where the spiritual perception is not the essence of things, the late Abbess Eugenia dedicates her spirit to Jesus and wonders Why in her excellent poem.

In these difficult times that sin has created, the sky bends to earth to help the tired humanity.

God sent the giant spiritual stature of Saint Raphael, sent the Saint of love, to pour balm on our tormented earth, where people lost their smile.