Lord Jesus Christ, Son of God, have mercy on me, a sinner

The Monastery of Saint Raphael 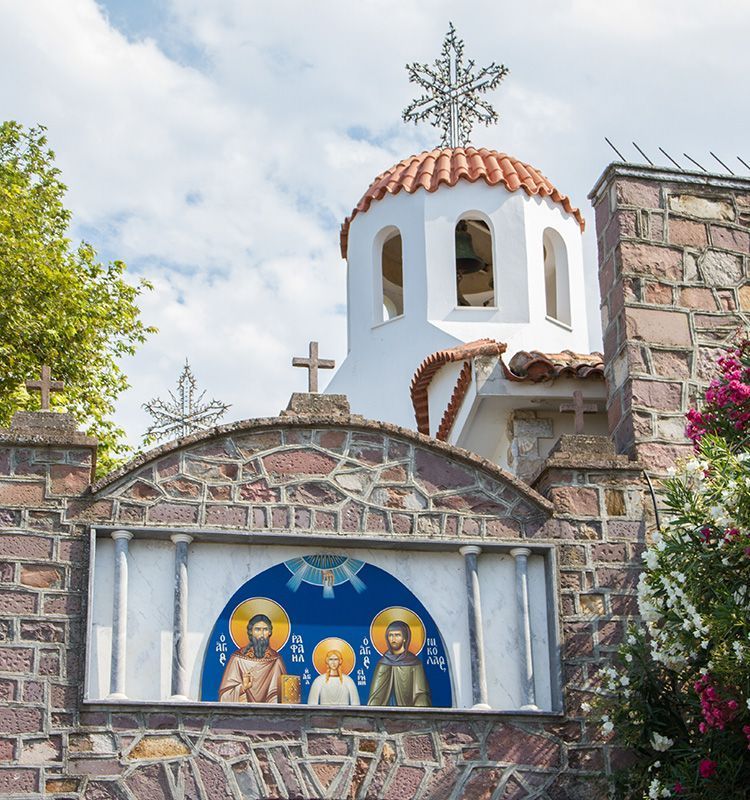 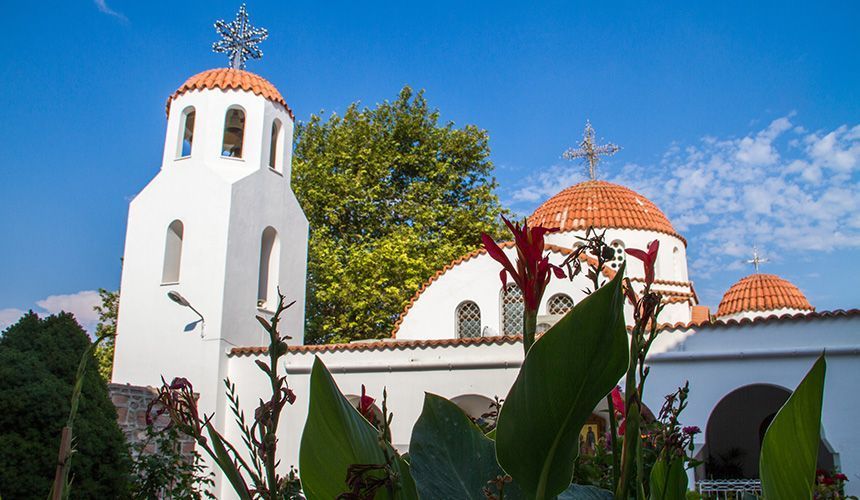 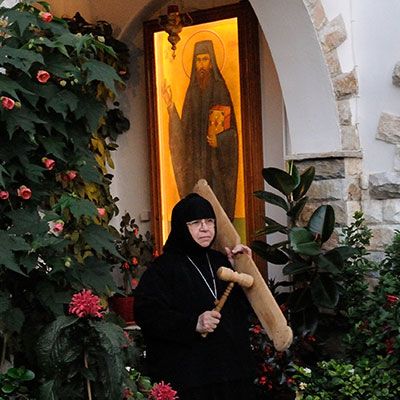 The Monastery of Saint Raphael is located in the NE of the island, 3 km far from the village of Thermi. The Monastery was built on the ground where an early Christian Basilica stood. The history of the Monastery covers 3 periods:

b. from 1433 to 1463 - the year the Monastery was destroyed by the Turks; St. Raphael was the last Abbot of that period, and finally

During its first period it was a female monastery. In 1235, 30 nuns and the then Abbess Olympia (later St. Olympia) were serving the Monastery, all of whom tortured to death by Saracen pirates.

During its second period In 1463, it was a male monastic community where St Raphael served as the Abbot of the Monastery.

After the Fall of Constantinople in 1453, St. Raphael and St. Nicholas settled and lived there peacefully, approximately for 9 years.

The Monastery was at that time dedicated to The Nativity of Virgin Mary.

In 1463 during an upheaval in Thermi the Christians ran for shelter to the Monastery. Among them there was Theodore the teacher of the small village of Thermi and a noble man called Vassilios - the father of the 12-year-old St. Irene - with his family.

The Turks arrived to the Monastery on Holy Friday and arrested them. They began to torture them in order to confess where the rest of the Christians were hiding and forced them to deny their faith.

They cut off  St. Irene’s little hand in front of her parents’ own eyes and then put her in a clay pot and burnt her alive. St. Raphael was tortured immensely.

They hit Him with truncheons and dragged Him by the hair and beard. He was beaten severely.  He was being pierced repeatedly with spears and finally they hung Him upside-down on a walnut tree and sawed off His lower jaw on Bright Tuesday.

That is why their feast day has been ordained to be celebrated on Bright Tuesday.

St. Nicholas was tied to a walnut tree and was also being pierced repeatedly with spears. He suffered a heart attack while watching his beloved Abbot’s jaw being sawed off. It was April 9, 1463.

After those horrible acts the Turks set the Monastery on fire and left.

The unknown story of the Holy Monastery was unveiled by St. Raphael himself to many people. The excavations and archaeological research confirmed everything He said.

She studied Theology and Literature. She was tonsured a nun by Metropolitan Panteleimon Fostinis of Chios and Hieromonk Kornilios Marmarinos who assigned her to be the Abbess of the New Monastery and the Holy Protection Monastery in Chios. After a while, she obtained permission from the Metropolitan of Chios to go to Vrilissia, Athens to build a church dedicated to St. Magdalene who was her patron saint.

Then, St. Raphael presented to her and said:

“Your plan will not be completed now because I would like you to become the Abbess of my Monastery”.

After receiving plenty of letters from the flock validating the call of St.Raphael, the late Metropolitan Iakovos Kleomvrotou of Mytilene executed the St.’s will.

On March 27, 1964 she officially accepted ordination as the Abbess and began her arduous, ascending path.

Living in a tent at first, she built the Monastery on Karyes hill from scratch.

Her devotion to the Saints and her self-denial made her father buy the surrounding lands. Endowed with excellent writing talent, she wrote 170 books which spoke to people’s hearts. Her books were reprinted in several countries and translated into various foreign languages. Her writings were internationally awarded. She built the Monastery with the earnings from her books.

Her personal contribution to the society was endless and invaluable as she offered scholarships and built and equipped schools, nursery schools, libraries and churches.

She financially supported the Female Orphanage in Mytilene, the local nursing home and many more.

It is well known what her faith, love, willpower and sacrifice have offered to the congregation.

It is also widely known how much faith she placed to the glorification of Saints Raphael, Nicholas and Irene and how much effort she put in to make the Monastery an international place of worship.

She often used to say with deep humbleness:

“Our Abbot is St. Raphael. Everything was done because of His guidance and support.”

She sincerely loved the people and did everything for the salvation of even a mere soul.

For the religious sisterhood of the Holy Monastery that she created, she will always be remembered as the Spiritual Mother of Love – the personification of humility and spiritual battle.

She will remain for the generations to come a bright example of virtue and piety.

A woman of many godly attributes curries out her responsibilities with great awareness and love.